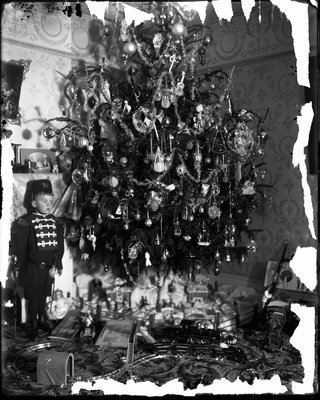 Stephen H. Appleton (1854-1909) began taking photographs in Media, Pennsylvania in 1888, and continued this work until the year of his death. Photography was a sideline to his fulltime profession, as an editor with the Delaware County American, a weekly newspaper located at 212 W. State St. in Media. His family figured prominently in his early photographs: wife Deborah, sons Harry and Alfred—and more than 13 years after Harry’s birth, his daughter Sue, born in 1896. He also took pictures of his extended family and made copies of old photographs of various relatives. Two genealogical charts, showing the descendants of the photographer’s grandparents; and those of Deborah Appleton’s parents, indicate whose photographs are included in the collection.